Qtrax, a new free music P2P download service, backed off claims that it has deals with all four major music companies after they publicly denied agreed terms with the start-up.
Guardian

Choosing forgiveness over permission is a risky PR strategy. Qtrax got huge amount of coverage, especially after the majors denied their agreements. They will always be able to make further announcements when deals are finalized and blame their over-enthusiastic nature for their first release: Now there is media interest to hear what they have to say and users know they exist. On the other hand, it adds unnecessary pressure to their negotiations with the music industry and their credibility will be dented. The end result: A lot of confused users will check-out Qtrax.com. I hope that their PR strategy was planned and that they provide some explanations on their website to capture this spike in traffic.

Posted by Joël Céré No comments: Links to this post 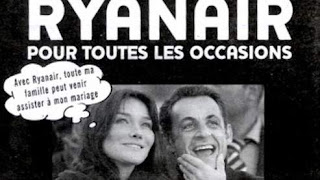 Carla: "With Ryanair, all my family can come to my wedding"

Seen in Le Figaro, en francais.
Posted by Joël Céré No comments: Links to this post